While I was researching the German history of Czech occupation for the captions of my Prague photos, I came across some very interesting and scary photos. The author of the site, just entitled Nazi photos, writes, “The following photos provide a pictorial glimpse of Hitler, how his Nazis mixed religion with government, and the support for Hitler by the Protestant and Catholic Churches in Germany. In, no way, does this gallery of photos intend to support Nazism or anti-Semitism, but instead, intends to warn against them.” 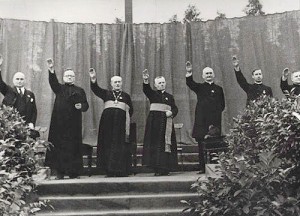 “Although Hitler had problems with the Catholic Church and eventually wanted to replace Catholicism with his brand of Christianity, the very fact that Hitler wanted a united German Church proves that he supported Christianity.”

I still find it hard to believe that something like this could have happened so recently in a supposedly civilized (though that shouldn’t matter) Europe. Sadly, I feel like similar genocide is occurring in Africa and elsewhere but the world outcry has not yet been the same.

This Spring Break I visited the Czech Republic. One of the most memorable days was the tour of the Terezin concentration camp. Hitler wanted this camp to serve as the “model” ghetto. For detailed information please visit the Jewish Virtual Library’s article on Terezin. I went with a group of friends and we were fortunate enough to get an English speaking tour guide just for our group of about 10. Below are some of the photos from that trip and information that the tour guide gave to us. Click each picture to read more detail about it. My entire collection of Terezin photos begin here. 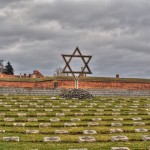 Houses of the Nazis